Our team visitied National Small-bore Rifle Association meeting in Bisley, United Kingdom. Besides usual souvenirs, they brought a very compelling story of pub shooting, which we could not keep to ourselves.

The story goes back to late 19th century, right to the dawn of modern firearms culture. At these times workers and soldiers of United Kingdom aspired to improve their marksmanship skills. At that time shooters of various age started coming together to sharpen their technique in a friendly company of each other and their .22 rifles.

This gave birth to a new type of shooting target (and later - to an entire tradition). The structural features of the new target helped to amaze spectators and bring in more passion for marksmen themselves! Here's how.

The target was round, and the round target face crafted from thick metal sheet had a tiny room in its very center. Inside this space there was a small bell made out of metal. That way scoring a bullseye resulted in high pitch tone coming from the bell. Of course, followed by encouraging applause from the audience!

Such targets got placed at an interesting distance of 6 yards, which had its own reason. The distance was not just made up. It was related to the place every man loved to visit after work. The actual shooting took place here as well. You know where the wind blows, right?

Exactly, local pubs! Shooters measured few pubs in area and came to a conclusion that an average pub in UK was around 6 yards long. Imagine drunk men blasting .22 rifles all over a crowded bar - how crazy is that?

Nowadays bell target shooting remains one of the most popular pub and club sports in United Kingdom. It goes well both with rifles and pistols. The weekend is near - grab a pint of beer and go ring that bell with ol' lads! 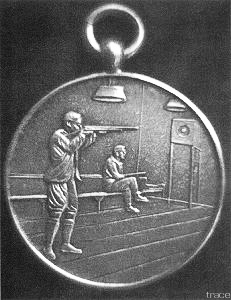